Wednesday’s announcement of our Happy Hearts Love Sharks wedding contest was great! Winning couple Amy and Jackson and the runners up, Kaman and Felix, joined us for the announcement at The Original Szechuan Chonquin on West Broadway in Vancouver. It was an extra special day for Amy and Jackson as they started dating nine and a half years ago to the day.

Jackson and Amy even brought their parents. Amy’s dad talked about how proud he was of the couple for standing up for something they believed in. So proud that he went out and emailed about one hundred of his own personal friends to tell them about going ‘Fin Free’.

Amy and Jackson made a moving speech in English and Cantonese. ”We know this is not the end of the journey to raise awareness for the conservation of sharks. We need more people to stand up. We need more Chinese people to really take action to save sharks and say no to shark fin.” – Amy

Sing Tao:  “Our dream really came true. The best thing is, both sides of our parents were very supportive, and we won a big prize. We plan to go take the Galapagos cruise next April on our wedding anniversary.”

Epoch Times: “Although some people still don’t understand why they’ve decided to do this, but they will take this opportunity to tell people the truth about shark fin, and hope that they will consider the bad that comes out of consuming shark fin soup, especially its impact on future generations.”

Congratulations again Amy and Jackson, Kaman and Felix, and all of our HHLS wedding couples past and present.

This year was very exciting for the Happy Hearts Love Sharks wedding contest. For the first time the contest expanded to Hong Kong through the Hong Kong Shark Foundation and we celebrated the 3rd instalment of the contest locally.

This year 19 couples entered the contest and they diverted over 3500 bowls of shark fin soup from being consumed. That’s 350 sharks!

Our FINtastic couples put forth amazing effort in spreading awareness this year and the race for first place was tight! Reaching all over the globe to spread the Fin Free wedding message, almost 3000 people voted for our couples. Although all couples are winners and champions of change in the community, unfortunately not everyone could be the grand prize winners. With no further ado, here are your 2012 HHLS winners!

With 1014 votes Amy and Jackson are our grand prize winners of the 6 day cruise to the Galapagos Islands! The honeymooners will explore the islands in style with daily opportunities to swim and snorkel in the pristine marine reserve. The Galapagos is one of the top diving and snorkelling destinations in the world! 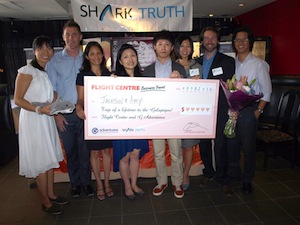 Showing off their creative side Amy and Jackson made a video which received more than 4,600 views on YouTube! WOW!

“We thought it was the right thing to do. Many shark species are in danger of extinction. In order to save them, we have to keep them alive” – Amy & Jackson

Coming in at a close second, Kaman and Felix did an amazing job spreading the Fin Free message and received 916 votes. The couple reached out to family and friends as far as Hong Kong for support! Kaman and Felix also connected with other shark conservation and environmental groups in Canada to spread awareness about the contest.

As runners up they are winners of an amazing Bonica camera. 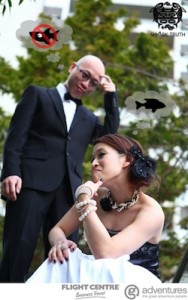 Elaine and Simon are this year’s Community Champions. They are not only spreading the Fin Free message locally, but they are going Fin Free for their banquets in Hong Kong and Taiwan!

They are winners of a creative photo shoot thanks to RF Photography. 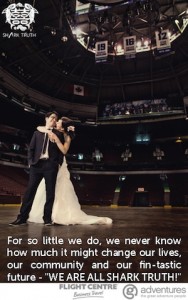 Jenny and Ben are Harry’s Favorite, which was decided by a panel of Shark Truth members. Jenny and Ben were features on the FRONT PAGE of the North Shore News talking about their involvement in shark conservation. Read the full story here.

The couple have been great supporters of the Fin Free movement and shark conservation as Ben was also a contestant in the Sans Fin Soup contest last year!

Thank you again to all the couples who entered and started their own traditions. We are very proud of all of you for standing up for conservation and sustainable choices. We wish you all the best in your new adventures together.

And thank you to everyone who voted and supported the couples! Stayed tuned for an update from Amy & Jackson’s trip as well as information on our contest next year!

Book your next trip with Robson Street Flight Centre and a portion of your booking will be donated to us when you mention Shark Truth.

“We are deeply proud of all the courageous wedding couples that are creating new traditions to protect our sharks, our oceans and our children’s future,” said Claudia Li, Shark Truth Executive Director. “We’re seeing a fundamental shift in public awareness and people’s mentality – shark fin is becoming taboo. Even restaurants are telling us that their sales for shark fin have plummeted,” said Ms. Li.

“FCBT is proud to be partnered with Shark Truth and G Adventures to assist bringing awareness and action to the issue of saving sharks from extinction. Real change is occurring and we applaud their dedication to this worth cause,” said Craig MacCarthy, Flight Centre Business Travel, Brand Leader.

The results for this year’s competition is realized through over 80 couples pledging to protect sharks by going ‘Fin Free’ or not serving shark fin soup at their wedding banquet, totaling to over 40,000 bowls of shark fin soup being stopped. The winners of this year’s contest will enjoy a 6-day honeymoon trip courtesy of Flight Centre and G Adventures to the Galapagos Archipelago on the luxurious G6 catamaran.

“In keeping with G Adventures’ commitment to giving back to the communities and natural surroundings we visit, we are proud to partner with FCBT & Shark Truth in their efforts to protect sharks from extinction,” said Aaron Sapra, G Adventures, National Sales Manager.

This year’s winning couple took the initiative to produce a video in both English and Mandarin to spread awareness about shark conservation. “We thought it was the right thing to do. Many of the shark species are in danger of extinction. In order to save them, we have to keep them alive,” said Jackson Wan.

Shark Truth is a grassroots nonprofit dedicated to promoting awareness, education and action for shark conservation. Our unique consumer engagement campaign includes the Happy Hearts Love Sharks wedding contest that rewards couples who pledge to go Fin Free at their wedding banquet. Learn more at sharktruth.org or join us at http://facebook.com/sharktruth

Congratulations and thank you to all couples who entered. 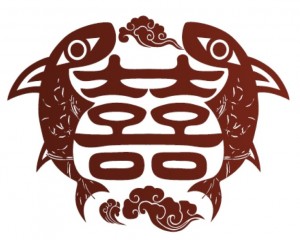 Voting for the 2012 Happy Hearts Love Sharks Wedding Contest is now open! Currently couples who have pledged to go fin free for their wedding banquet have diverted over 2,890 bowls of shark fin soup from being consumed! See the couples and read their stories on our Contestants page.

Voting is easy! Just comment on your favourite couples photo. You can vote for multiple couples but only one comment per user counts. Lets celebrate these couples who are helping to save our sharks and oceans and who are paving the way for change.

COMPLETE YOUR ENTRY! If you have not already, now is the time to complete your official entry form for a chance to win the grand prize trip to the Galapagos. Couple entries that meet the eligibility criteria will be accepted until July 27th.

With so many great couples entered so far, the competition is sure to heat up quickly! Stay tuned for contest updates throughout the voting period.

Don’t forget to book your next flight/vacation with Flight Centre Robson Street as a portion of the proceeds will be donated to Shark Truth!  Find out more here.